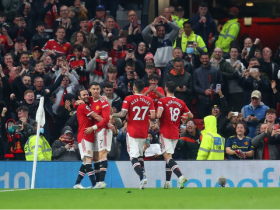 When the transfer market reopens, Manchester United will prioritise recruiting central midfielders, and important figures in the club’s boardroom have put together a framework for a potential deal for Leeds United’s Kalvin Phillips. This comes despite long-standing interest in England’s Declan Rice.

When it comes to spending money on lower-league players, City have recently had success. Guardiola used the same strategy to get Kyle Walker, John Stones and Riyad Mahrez.

“Southampton have the best free-kick taker I have ever seen or at least in the world right now,” Guardiola remarked earlier in the season. He’s so good you might miss the football player. He’s a fantastic team player, with and without the ball.

People are more interested in his free kicks, set-pieces, and corners, which he takes well. “He is a fantastic footballer who understands the game.”

This season, the midfielder has scored ten goals in 39 appearances across all competitions, and by converting 14 free-kicks during his current Premier League career, he has reduced the gap on former Manchester United great David Beckham’s previous Premier League scoring record (18).