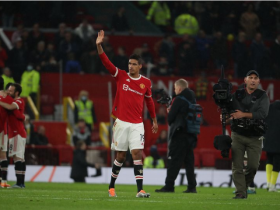 Rangnick’s hand has been forced by the outcome of Sunday’s Premier League games, as Manchester United prepares to face Brentford on Wednesday.

The cautious method taken by Ralf Rangnick in integrating Manchester United’s academy players into the first team should be commended.

When things became rough at Old Trafford earlier this season, it would have been quite easy to push players like Hannibal Mejbri, Alejandro Garnacho, and Alvaro Fernandez into the starting lineup. However, when considering the big picture, it is possible that it did more harm than benefit.

In some ways, the Theatre of Dreams has resembled a nightmare this season, particularly throughout the first half. Even if United hasn’t played up to expectations since August, the mood in the stadium has occasionally turned sour as a result of their struggles on the field.

When asked about giving younger players more playing time this season, Rangnick himself made a veiled allusion to this. Back in April, he emphasized that “it is always about playing the strongest available team because these are not friendly games” and that “I don’t think we would do any of the youngsters a favour if we brought them in at the wrong time.”

“I enjoy playing young players, but only at a time when the squad is functioning well and displaying confidence in its abilities. Then it might be a good opportunity to give young players some playing time, but not in this situation.”

This is a commendable move on the part of the interim manager, but his ‘friendly’ justification no longer holds water. As a result of Arsenal’s victory over West Ham, United are eight points behind fourth-placed Arsenal with nine points remaining on the table this season. In addition, Mikel Arteta’s team has a game in hand over Manchester United. Let’s face it, the dream of qualifying for the Champions League is over.

Are there any Manchester United fans who would lose sleep if their team were to compete in the Europa League rather than the Europa Conference League, with all due respect for both competitions? It’s exceedingly unlikely to happen.
The result is that United will conclude the season with three dead rubbers – a terrible statement of how far they have sunk in recent months. Then, why not provide a glimpse into the future to the United faithful who travel all across the country to support their team?
Some of the talented players in Erik ten Hag’s team may benefit from playing time, which would make his work a little more manageable for the manager. Given that Garnacho, Hannibal, and Alvaro Fernandez all played for the U23s on Sunday, it is possible that there will be a logistical problem with their participation against Brentford.

The fact that academy players have appeared in two games within a short period of time is not unprecedented. Cole Palmer played in two matches in less than two hours for Manchester City’s senior team and U23s in the month of October across the city.

A 20-minute cameo appearance for the United youngsters on Monday evening would be a fitting reward for their outstanding performances for the academy. Now that Rangnick has waited long enough, it is time for the following generation to demonstrate what they are capable of accomplishing.