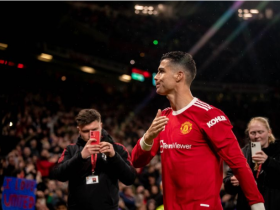 In their final Old Trafford encounter of the season, Manchester United will face Brentford, and here are five things to keep an eye out for.

A slap in the face to one’s reputation?

United’s final home game of the season comes at an exceptionally early period – a consequence of the Chelsea tie being rushed ahead 17 days – and it is typical for teams to go on a lap of honour.

The last time United did it while the stadium was at capacity Paul Pogba was embroiled in a heated argument with some supporters in the Stretford End. That was nothing compared to the abuse he received 16 days prior against Norwich.

Ander Herrera was given a good send-off on that day, and Manchester United fans are polite enough to thank departing players. Both of Nemanja Matic’s last two home games have ended in standing ovations, and Juan Mata and Jesse Lingard have been instrumental in helping Manchester United win the league and cup competitions, respectively. post-Ferguson

The contracts of Matic, Mata, and Lingard expire in June, and they will all be free to leave the club. Mata and Lingard may have revealed their departure date by the time you read this.

Mata came on in five of the last seven matches and Lingard was meant to be in the team against Chelsea but had to withdraw due to personal family circumstances. Ralf Rangnick stated Edinson Cavani will be back on the bench, so don’t expect him to be on the teamsheet. Lee Grant, who has started none of the team’s home games, will also be leaving in the summer.

This will be the fourth time in a row that United hasn’t won more than 10 games at Old Trafford in the Premier League. So far, they have managed nine – the same amount as last season’s deceptive campaign.

Is Pogba going to be there?

After Mino Raiola died on Saturday, Pogba decided to use a photo of the two as his Instagram profile picture. Pogba never rebuked his agent for his divisive sound bites and stood by him when he needed it.

Despite Manchester United’s collapse in the last five years, Raiola and Pogba had a relationship that was both family and mutually beneficial for the better part of a decade.

Alejandro Garnacho debuted against Chelsea and Alvaro Fernandez made the matchday squad for the first time. It would be a waste of time to keep Hannibal Mejbri from making his home debut any longer.

Garnacho, 17, is likely to start in the FA Youth Cup final next week in front of a crowd that might be north of 40,000, which would be a record for the competition. Seeing Garnacho in action once more with the first team will only serve to heighten his own anticipation for the game against Nottingham Forest on Wednesday.