Ousmane Dembele Has Been Offered A Contract By Manchester United. - Sport Twistok 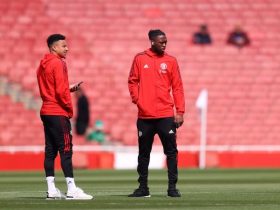 Aaron Wan-Bissaka could be set for a return to the Crystal Palace team.

The Barcelona winger’s contract expires at the end of the season, but the club remains hopeful of reaching an agreement with the France international before the deadline.

According to The Express, Dembele turned down a contract offer from Barcelona earlier this year, so if it is true that United are attempting to sign him this summer, they will need to move quickly.

Now, according to journalist Dario Montero of El Chiringuito, United has made a contract offer to the player worth between £8.4 million (€10 million) and £12.5 million (€15 million) net per person.

Montero goes on to say that if Dembele decides to leave Barcelona, he will have competition from Paris Saint-Germain for his signature.

He goes on to say that Barcelona is aware of the proposals, though it will be determined in due course whether or not these rumors are accurate.

Dembele has been linked with a move to Manchester United numerous times in recent years, but no agreement has been reached, and now is an excellent opportunity for his representatives to focus on obtaining the best possible contract from the club.

On a related topic, anyone who follows Erik ten Hag’s Ajax team would know that he is a fan of wing players. When he realizes we don’t have any talent on the right, his expression will be priceless – unless he believes Amad Diallo deserves a shot at the Premier League next season.