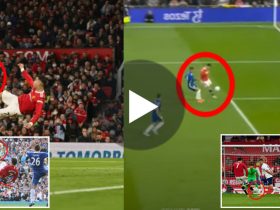 Jesse Lingard and his brother voiced dismay at Ralf Rangnick’s decision to deny him a final appearance at Old Trafford for Manchester United.

Ralf Rangnick has reaffirmed his decision to deny Jesse Lingard a final appearance for Manchester United at Old Trafford.

Louie Scott, the brother of Manchester United’s out-of-contract winger Jesse Lingard, took to Instagram to slam manager Ralf Rangnick for not introducing his brother as a substitute in the final home game of the season against Brentford.

Scott added, “no wonder it’s the Europa Conference League” for the upcoming season, while Lingard uploaded a photo of himself as a young youngster in training at Manchester United’s Carrington facility.

Rangnick dismissed the Lingard family’s complaints at his post-match press conference, where he explained why Lingard did not enter the game.

“To begin with, I believe he has played far more games in the previous couple of weeks than he did before to my arrival,” Rangnick emphasized. “Number two: on the day of the game against Chelsea, he contacted me at the hotel and begged me to release him from the game, as well as the training session the next day and two days after the Chelsea game, citing personal and family reasons. I also permitted him to do so.

“Unfortunately, I had to choose between bringing on Edinson Cavani, Jesse Lingard, or even the young Alejandro Garnacho, whom I would have wanted to bring on and give a chance after going 3-0 up with 15 minutes to play and only having three subs. In other leagues, you have five subs.” But I made the decision to hire Edinson for the same reasons I just described.

“Had I not substituted a player, perhaps someone else would have commented that it was uncouth not to substitute Edinson Cavani or that the manager should have substituted Alejandro Garnacho. With only three subs remaining and two already used, you must make a decision that not everyone will agree with; nonetheless, this is part of the game.

“To be honest, I’m not reading much; I haven’t had the time to read in the previous six months. I’m not on Instagram or Facebook; I’m not active in those areas.

“My focus has always been on developing the team alongside my coaching staff. In this day of social media, there is always someone publishing something, and it is vital for us at the club not to take it too seriously. It could be a different story unless it’s the athlete himself.”