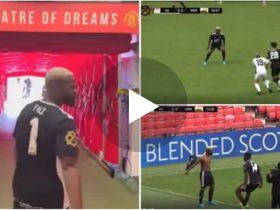 Erik ten Hag, the manager of Ajax, will take over as the next manager of Manchester United, and his own playing history may provide some insight into what his club will be like.

Erik ten Hag’s stint as Manchester United manager started in just two games. It is the penultimate game of the season and another opportunity to build the framework for the future, with a number of youngsters in contention to make their debuts against Brighton this weekend.

After a victory over Brentford earlier in the week, Saturday’s trip to the South Coast will be a chance for fresh starts and a chance to show supporters what the future may hold for the club’s first team.

When United decided to hire Ten Hag as their next manager, one of the primary reasons was his track record of developing exciting young talent. Another important factor was the work ethic he expects from his players, which stems directly from his own playing career.

Although he rose to prominence as a result of his exploits with Ajax, the 52-year-time old’s with FC Twente, where he spent three different seasons over the course of his 13-year professional career, is just as well known.

Fred and Scott McTominay could benefit from Ten Hag’s admiration for the role he has played as a selfless teammate, which could lead to more opportunities for the duo under the Dutchman.

When Fred admitted in February that he ‘carries the piano for the musicians to play’ and that he compensates for his technical limitations by working harder than anybody else on the field, he reinforced his cult image among fans even more.

Ten Hag instilled an ethos in his players at Ajax that he will no doubt try to reproduce in Manchester, and it is not only the desired mentality and work ethic that United desire, but it is also the same ethos that United craves.

In his first great squad, Lasse Schöne was responsible for the dirty work at the base of the midfield, and this season, Edson Alvarez has done a lot of it, disrupting play and causing a nuisance to opponents with his intense pressing style.

The summer transfer market will likely see a lot of attention focused on the signing of at least one new midfielder. However, the true success of United’s first season under Ten Hag may probably be determined by the effective squad players who are willing to sacrifice themselves for the better good of the team.

Fred has a lot of hauling to do before the day is done.