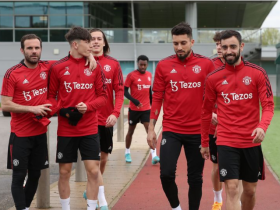 There will be plenty of work to do for new Manchester United boss Erik Ten Hag during the summer transfer window, but there is one position that must not be overlooked.
Erik ten Hag has a monumental task ahead of him, and it will begin even before the first ball is kicked under his direction in the upcoming season.

If Ten Hag is to have a successful first season in charge of Manchester United, the summer transfer window will be extremely critical to his chances of having a successful season. As Ralf Rangnick has pointed out, several players will be required, but there is no reason why a large portion of the job cannot be completed during the summer months provided the club is willing to get their finger out of their collective ear.

While Paul Pogba, Edinson Cavani, Nemanja Matic, Jesse Lingard, Juan Mata, and Lee Grant will all be out of a job when their contracts expire at the end of this season, the futures of Cristiano Ronaldo, Anthony Martial, Donny van de Beek, Dean Henderson, Eric Bailly, Phil Jones, and even Marcus Rashford are all under consideration.

United may finally be getting the clearout they’ve been begging for for a number of years, with six players already out the door and the chance for another seven to follow them out the door. However, the task will be to replace those departing bodies not with a large number of them, but with high-quality replacements.

A new striker is on the shortlist, too. With Cavani departing, Martial wanting out and Mason Greenwood unavailable, 37-year-old Ronaldo is United’s only central striking option at present and even he may leave. Hopefully, Ten Hag will be able to convince the five-time Ballon d’Or winner to stay despite the lack of Champions League football and then a younger striker can be bought to play under and learn from him for a season.

Which positions are most likely to be targeted first and foremost is clearly apparent. United’s midfield options are already limited, and with the departures of Paul Pogba and Nemanja Matic, the situation is set to deteriorate even further. As a result, a new defensive midfielder – with a deal for Leeds’ Kalvin Phillips currently being discussed – as well as a more dynamic and technically gifted box-to-box option will be required. Finally, after years of squandering money on other areas, Manchester United has decided to make midfield reinforcements a priority this summer, which is a relief.

The addition of a center-back is also high on the priority list following yet another season of poor defensive play. This year hasn’t been easy for Harry Maguire, Raphael Varane, and Victor Lindelof. With Bailly and Jones likely to leave, another player is being looked at.

Erik ten Hag may already be aware of his Manchester United’s first signing.

In addition to those three areas, there is another area that has been a problem for United throughout the campaign that needs to be addressed. Right-back.

As Europe’s finest teams strive to build all-conquering sides in recent years, full-back has emerged as a critical position for them to develop. Look at the caliber of players that Liverpool and Manchester City have on their respective teams. United, particularly on the right, simply do not measure up to the competition.

So while many of other positions need immediate attention in the summer transfer window, Ten Hag will also have to address his full-backs, too. Despite Alex Telles’ terrible tenure in the side, the left-back should be fine for at least another year, according to the club. Despite a disappointing season, Luke Shaw continues to be a very excellent player, while promising youngster Alvaro Fernandez is pressing his way into the first squad as well as possible.
However, there is substantial need for improvement in the right-back position. Ethan Laird, a youngster, could make an impression during pre-season, but a permanent replacement is almost probably necessary. Perhaps it won’t even require a substantial increase in the budget, given the fact that cost-effective solutions – such as Jurrien Timber and Djed Spence – have the potential to be significant enhancements over what they already have.

While Ten Hag will be faced with a slew of important decisions this summer, failing to recruit a new right-back will put his team’s future in jeopardy.