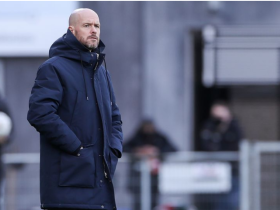 Ronaldo was outstanding on an individual level despite the fact that Manchester United only managed five points from six games in April against teams such as Leicester City, Everton, Norwich City, Liverpool, Arsenal, and Chelsea. A hat-trick against Norwich was among the five goals the forward scored in the four games he appeared in – Ronaldo was unavailable for United’s matches against Leicester and Liverpool.

After being voted Player of the Month in September, the 37-year-old is vying for the award once more this season. It is only Steven Gerrard (six), Sergio Aguero (seven), and Harry Kane (seven) who have won the personal trophy more times than Cristiano Ronaldo (five).
With his win in January, David de Gea became the most recent United player to take home the accolade this season. On that occasion, De Gea became the first goalkeeper to receive the monthly award since February 2016, and he became the first to do so since 2011.

Ronaldo has scored a total of 24 goals in 38 appearances for Manchester United this season, with just Mohamed Salah of Liverpool and Tottenham’s Son Heung-min of Tottenham having scored more goals in the Premier League this season. This season, the forward has often been the hero for United, scoring goals on his own.

ALSO READ: Thanks to Pep Guardiola and Manchester City, Manchester United fans have something to chuckle about this season.

Ronaldo has been nominated for the Player of the Month award for April, along with Kevin De Bruyne, Gabriel Jesus, Son, Thiago Alcantara, Bruno Guimaraes, Leandro Trossard, and Nathan Collins. The honor will be presented on May 1.