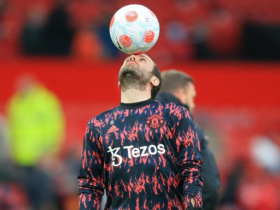 Cristiano Ronaldo has cast further doubt on his future at Manchester United after claiming that he did not get a message following the team’s victory over Brentford.

Following Manchester United’s victory over Brentford, the star midfielder appeared to convey a message about his future.

Manchester United finished the season with a 3-0 victory over Brentford thanks to a penalty from Cristiano Ronaldo. Including this strike, the Portuguese ace has scored 18 goals in the league this season and 24 in all competitions this campaign.

However, there is still some uncertainty around the 37-year-future old’s with the Reds. Due to the fact that United are expected to miss out on Champions League football next season, talk has erupted that Ronaldo would quit the club during the summer transfer window, despite the fact that his contract has one year remaining.

The five-time Ballon d’Or winner, though, appeared to offer a major hint about his future following United’s 1-0 victory over Manchester United on Monday. Sky Sports cameras zeroed in on him as he began a lap around the pitch to express his gratitude to the home audience as he muttered something on the microphone.

Ronaldo appeared to declare “I’m not finished,” leading some United fans to speculate that he may be planning to stay at the club for the upcoming season. The message, on the other hand, has been questioned by the individual himself.

Upon receiving a message from a fan account stating that “I’m not finished,” Ronaldo responded on Instagram, saying, “I didn’t say that.” With his answer, the Portugal international raises questions about what he might have said instead, as well as generating additional conjecture about his future in the game.

As a result of Ronaldo’s return to Old Trafford last summer, some United supporters are now wondering if they witnessed his final appearance at the stadium. Ralf Rangnick, the temporary manager of the Red Devils, believes he will remain in his position.