Christian Eriksen Should Be The Answer To The Juan Mata Replacement. - Sport Twistok 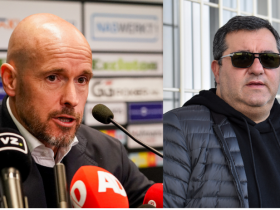 With five players leaving on free transfers this summer, Manchester United may be able to save up finances by replacing them with a straightforward transfer of their own.

At Manchester United, it will be a case of out with the old and in with the new in the coming months. The five players who will be departing the club when their contracts expire next month are all over the age of 29, whilst the arrivals hall is set to be dominated by younger players in the next weeks and months.

In the past, Ralf Rangnick has voiced his wish for Manchester United to place a greater emphasis on signing younger players, while Erik ten Hag has had great success at Ajax by assembling teams around a core of excellent young players.

However, as Ten Hag is well aware, ignoring the importance of experience is a recipe for disaster, and while it has been the youthful guns who have tended to steal the headlines in his Ajax teams, he has surrounded them with experience.

Video: Liverpool scored two goals in short succession to turn the Champions League match around in this video.

He has added players like as Daley Blind, Davy Klassen, Dusan Tadic, and Steven Berghuis to his roster to complement the young talent already at his disposal, and the resulting balance has proven to be successful.

Manchester United have a wealth of experience, despite the departure of young players such as Paul Pogba and Jesse Lingard, as well as Nemanja Matic, 34, Juan Mata, and Edinson Cavani, 35, who will all leave the club this summer.

With Cristiano Ronaldo, no other player in Europe has a more impressive resume; Raphael Varane, on the other hand, has won titles with both Real Madrid and France. Despite the fact that the emphasis will be on rejuvenating this squad, it is possible that further experience will be required.

Given the fact that those five departures will not be the last of the Old Trafford farewells, it is likely that Old Trafford will have a busy summer ahead of it. Phil Jones, Eric Bailly, and Anthony Martial, all of whom have expressed a desire to play first-team football, might all be sold as well.

It will be impossible to replace all of them. As a result of the funds made available to football director John Murtough, the emphasis will be on strengthening key positions, particularly in central midfield and attack, so any bargains that United can find to add to their squad could be advantageous.

The 3-0 victory over Brentford on Monday night could have also served as a scouting mission for the team. When Mata played for Manchester United, he displayed all of his artistic abilities for the final time, but he wasn’t the only playmaking midfielder to catch the eye.

Christian Eriksen has been in outstanding form since joining Brentford in January, and the Stretford End rose to its feet twice in the first half to show their appreciation for his efforts. It has been a heartwarming story recently to see the 30-year-old return to action after suffering a cardiac arrest during the European Championships last summer. But the midfielder is doing far more than just making up the numbers.

As a result of his impressive performances on Monday night, Brentford will find it difficult to keep hold of Eriksen beyond the summer transfer window. Eriksen has been a key part of the Bees’ success so far this season, and his future with the club looks uncertain. For understandable reasons, the Denmark international signed a short-term contract with Brentford in January. However, his impact has attracted the attention of teams much bigger than the Bees.

Thomas Frank is confident that Christian Eriksen will choose to remain at the club, and he appears to be enjoying himself on the field, having finished on the winning side in six of his eight starts for the club so far.

“I’ve always believed that we have a very good chance of winning. I am aware that he is content in this location and that he is enjoying his football. It is a decision that will be taken at the end of the season,” said Frank.

The Brentford boss added the club were “presenting our plans” to Eriksen and it’s clear he’s quickly become one of their key players.

A return to Tottenham under Antonio Conte, a manager who struggled to adjust at Inter Milan before playing a key role in winning the Scudetto last season, has been rumored. According to Monday night’s performance, it’s possible the midfielder may end up at Old Trafford next season.

A creative midfielder with a contrasting style to Bruno Fernandes like Mata proved the value of having Eriksen as a counterpoint. He’s more than capable of filling in for Fernandes at No. 10, but he could also play in an aggressive midfield role against a weaker opponent.
Eriksen departed Ajax before Erik ten Hag arrived in Amsterdam after three years in the Eredivisie, but the next manager of United will be familiar with the midfielder.

In the midst of a summer of major departures for Manchester United, he would be able to add depth and experience to the team without having to pay a transfer fee. It’s a deal that could have a lot of advantages for United.