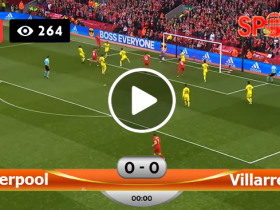 Keita’s goal was the highlight of the half but a freekick from Liverpool captain Jordan Henderson was clearly the opposite. Trent Alexander-Arnold, the Reds’ habitual free-kick taker, was caught on camera after the effort and his reaction is shown below.
The Liverpool right-back was seen watching a replay of the dead-ball attempt on a monitor and couldn’t help but chuckle at his captain’s attempt.